President Museveni has ordered for an immediate heavy deployment of security in all industrial parks around the country following attacks on Chinese investors.  In the past one month, over five Chinese factories have been attacked and robbed of huge sums of money by unknown assailants mainly in Wakiso and Mukono districts of Kampala Metropolitan.  On Tuesday, Museveni met with the Chinese ambassador to Uganda Zheng Zhu Qiang, the various heads of security agencies among them the Chief of Defence Forces, Gen.David Muhoozi , the Inspector General of Police, Martin Okoth Ochola and his deputy, Brig.Muzeeyi Sabiiti at State House in Entebbe.  In the meeting, it is said that they discussed attacks on Chinese factories before it was agreed that heavy deployment be provided to industrial parks.  In a statement on his social media accounts, Museveni confirmed the meeting before reiterating government’s commitment to protect everyone and also defeat the thugs whom he said are trying to undermine the country’s economic progress.  “In industrial parks, we shall deploy at least 12 armed personnel with a car to patrol the area and be able to respond in a timely manner in case of any disturbances, whereas we shall deploy 4 armed personnel at premises that are outside industrial Parks,”Museveni said.  He pointed out that he had been told of some security personnel who connive with the thugs to terrorise investors but ordered security chiefs to find more information about the allegations so that the culprits can be dismissed from the security agencies.  “We shall recruit serious people that are ready to serve the country from our children who don’t have jobs,” he said.  “In the meantime, I assure Ugandans, our friends and investors that this shallow issue of urban crime is only temporary and will be defeated since in addition to these measures, we are beefing up our surveillance capacity with cameras.”

In September 2017, unknown assailants broke into Nile Steel and Plastics factory premises in Mukono, killed a Chinese manager and took away with huge sums of money.  In October 2018, thugs raided CCLE Rubber Company in Mbalala, Mukono district before injuring five workers and taking away with shs 40 millon and mobile phones.
Thugs armed with pangas last month attacked Crane Roofings Limited in Kyampisi, Mukono district. They hacked the Chinese proprietors and robbed the company of Shs 30 million, 12 mobile phones and other items.  Recently, the Internal Security Organisation arrested two suspects in Nansana in connection with the attacks. 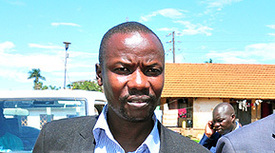